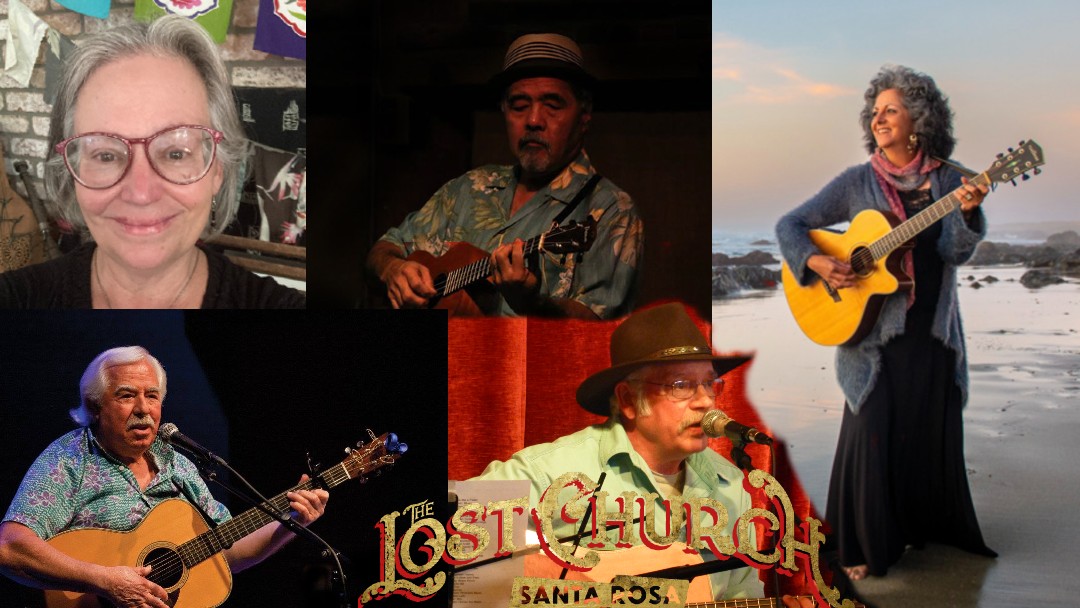 Dave Hamilton was born and raised in Santa Rosa Calif. and is a lifetime Sonoma County resident. He has been playing music and writing songs in the North Bay for many years. He plays mostly in the Folk/Americana genres but also incorporates country and ragtime mixing originals and covers. He is a multi-award winning songwriter with the West Coast Songwriters Association. In 2017 and 2018 he won Norbay music awards in the North Bay Bohemian having been voted singer/songwriter of the year. In 2019 he won the Norbay award for acoustic musician and in 2020 and 2021 he was voted folk musician of the year. He has released three Cd’s which have been played on several local radio stations such as KRCB, KRSH, KOWS, and KSVY. Dave plays as a solo artist, a duo and fronts his own trio and, at times, a quartet.

Lauralee Brown
Born in Albuquerque New Mexico, Lauralee Brown is a vocalist/entertainer/artist/ singer-songwriter who has been living  in Northern California since the mid 1980’s.
Over the years Lauralee Brown has been involved in many musical, performance and other creative endeavors including comedy, Dinner Theater, community radio; She’s been in multiple bands, most of which had an emphasis on writing, recording and performing original material. Lauralee was a co-manager for the West Coast Songwriters Organization’s San Rafael Chapter from 2013 until 2022.
In 2009 she founded and hosted a singer songwriter series in West Marin. It is an ongoing series, now known as The Little House Lounge, which she co-hosts in Novato with Joel Schick. Lauralee has been playing guitar and singing as a solo artist since early on in her musical career. She performs regularly in Fort Bragg California, where she and her husband are now located.
www.facebook.com/lauralee.brown.96
www.youtube.com/channel/UCkRjJ50lAqwLqa5FUILxqpw

Cory Veltman is a singer/songwriter/multi-instrumentalist living in Sebastopol since the late 90’s. Her musical adventures range from old English and Celtic music on hammered dulcimer for Renn Faire weddings to being dubbed “La Gringa Que Canta” and guitarist for the South American Andean boys of Cuyuy. Currently, she plays mandolin and harmonizes with Michael B. Serious and The Casual Acquaintances, cheerful songs of death and sorrow, and is also a member of As The Crow Flies, an eclectic variety of folk rock with touches of blues, reggae, bluegrass, and classic rock. On her own, she is best described by her song lyrics — ♪ she borrows songs from rap and pop and some from those who croon, but her favorite songs come from her soul, and she sings them to the moon… ♪ Her voice and guitar weave melodies that will make you laugh, cry, bring on the rain, and even once, shatter a window. Check out her YouTube channel “Cory Banter 9”:
https://www.youtube.com/channel/UCGijCP_GCc0VRvcOoCqkGUw
https://www.facebook.com/Michael-B-Serious-1830623883623718

Jay Gottlieb has been playing guitar and writing songs for over 25 years. He’s worked with Steve Seskin, Steve Gillette & Cindy Mangsen, Lloyd Maines and Terri Hendrix. He’s won 0ver 14 “Best Songs” in West Coast Songwriters Competitions, and has even managed two of the WCS venues for over 13 years. He has attended, (the famous), Mrs. Freelinghausen’s School For Disadvantaged Kazoo Players, and flunked out only twice before finally graduating. Once, he actually saw Bob Dylan. He was a founding member of several bands including “The Usual Suspekts & The Innuendos”, “Hardley Davidson & The Backfires”, and “Sue Nommy and The Under Tows”. He rarely makes public performances, his last one being in 2010 at the “Curr-Ville Dog Days Fest”. You’re sure to enjoy at least one of his songs.

Gary Sugiyama started playing ukulele in junior high and picked up the guitar in high school during the folk deluge of the sixties. After many years living in San Francisco, he returned to his hometown of Santa Rosa to continue his career as a graphic artist. There he found himself back on the local music scene after joining with friends who encouraged him to pick up his uke and guitar again.
Along with his wife, Becky Brendlin, they developed an interest in traditional Hawaiian music and dance. They are members of the Bohemian Ukuleles, who performed at the 2016 Ukulele Festival at Kapiolani Park in Waikiki. He has led workshops at the Sebastopol Ukulele Festival, Ukes on the Loose, the Sonoma County Bluegrass and Folk Festival, Mendocino Coast UkeFest, EHo’onanea, and the Napa Aloha Festival. He can also be heard on the soundtrack of the documentary, ”Leap of Faith” by Lina Hoshino, with the Sonoma County band, “New Skye”. He is currently a member of Maile Swing, a Hawaiian band, and the Cedar Mountain String Band. He can also be seen at various Hawaiian music events around the Bay Area.