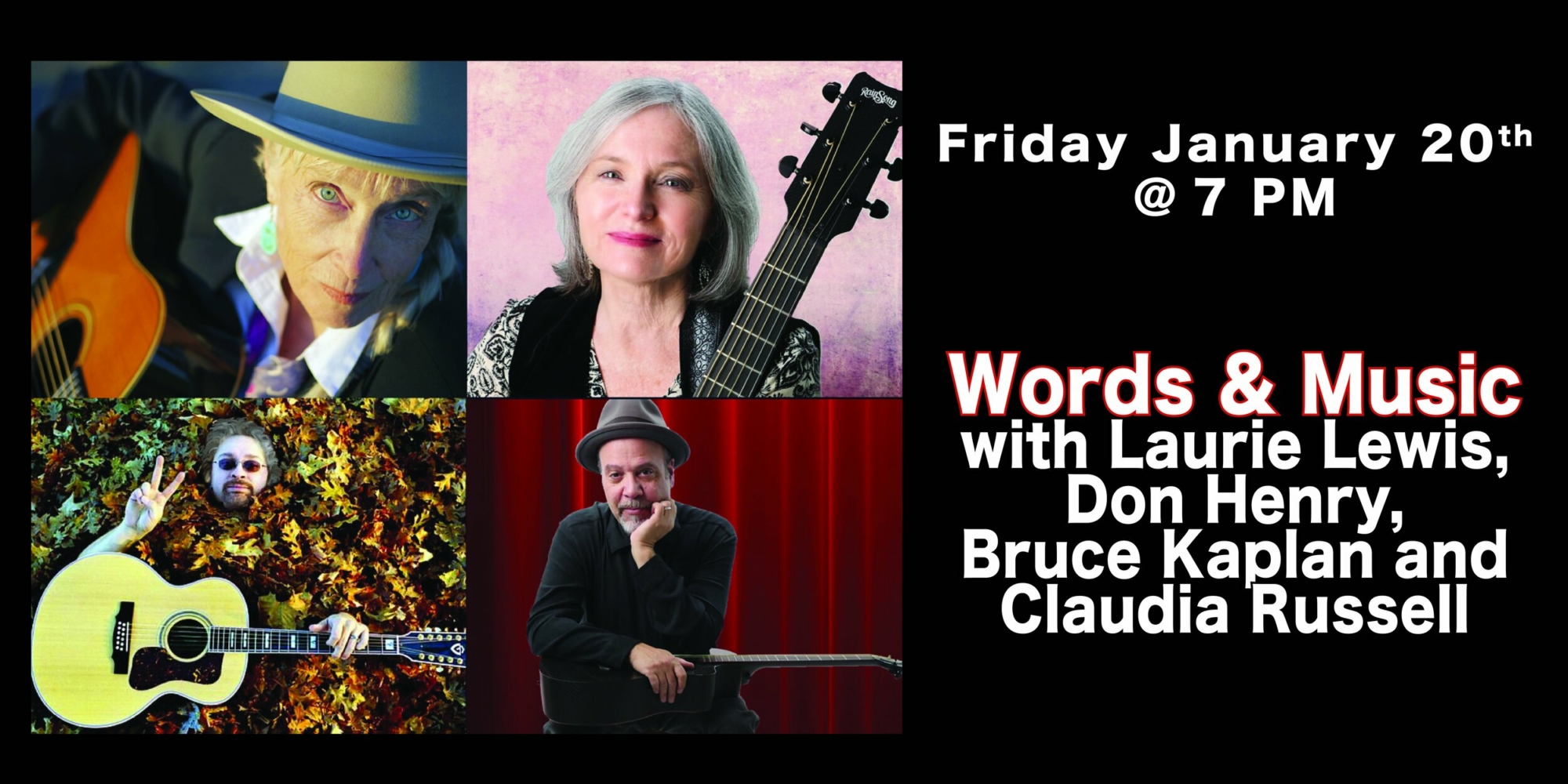 Sure, you could call Words + Music a song circle, but with four of folk music’s most distinctive musicians rounding it out, it’s much more than that. When Laurie Lewis, Don Henry and Claudia Russell take the stage, they elevate the experience, singing harmony and accompanying each other instrumentally, while Bruce Kaplan provides the icing on the cake with tasteful guitar and mandolin. Magically, they are transformed into a pop-up band.

Laurie Lewis is well known to OCA audiences and a world-renowned singer, songwriter, fiddler, guitarist, producer and educator. As bandleader, she often performs with her band, The Right Hands at festivals all over the world. According to Linda Ronstadt, “Laurie’s voice is a rare combination of grit and grace, strength and delicacy. Her stories are always true.” Lewis has twice won the International Bluegrass Music Association’s Female Vocalist of the Year. She has recorded nearly 20 albums for such labels as Flying Fish, Rounder, Sugar Hill and her own label, Spruce & Maple Music. Laurie has had multiple Grammy nominations, and won the coveted award for her contribution to “True Life Blues: the Songs of Bill Monroe.”

Nashville’s Don Henry is a songwriter’s songwriter, bringing humor, depth and a profound sense of humanity to his songs. Miranda Lambert, Ray Charles, Patti Page, Conway Twitty, Blake Shelton, and others have recorded his songs. Don won a Grammy, too, his for Kathy Mattea’s version of his “Where’ve You Been” as well as Song of the Year honors from the Academy of Country Music and the Country Music Association. According to Entertainment Weekly, “Henry comes across as a first cousin to Randy Newman, with hot-wired songs about born-again whores, interfaith marriages, and the homeless taking over the White House. This is funny and thought-provoking stuff, all of it good.” When not performing solo and with Words and Music, Henry opens shows for and plays with folk legend Tom Paxton.

Words + Music was the brainchild of Berkeley’s Freight & Salvage regular Claudia Russell. Her heartfelt and humorous songs have won her accolades on both sides of the Atlantic. According to Britain’s Country Music People UK, “Few singers can construct a song as well as Claudia Russell, and her sharp, well-observed lyrics have an engaging, timeless feel.” American Songwriter hailed her 2013 CD, “All Our Luck Is Changing,” as “a masterpiece,” and Sing Out magazine called her “an outstanding talent in the crowded field of singer/songwriters.” Boston’s WUMB-FM named Russell Artist of the Year and the East Bay Express selected her as Best Musician.

This year, Bruce Kaplan adds his distinctive guitar and mandolin to the evening’s music. As right-hand man to Russell, and an occasional songwriter himself, Kaplan has developed a reputation for tasteful accompaniment. His hallmark is coming up with counter parts that that elevate each song – never overdone, always melodic and often ethereal.

This extra special evening of savvy songwriting, superior singing, and beautiful accompaniment happens just once each year. So join us on January 20 for an evening to remember with Words + Music.