Singer-songwriter Ian Tyson left us “old folkies” with some classic folk material.
His popularity in the U.S. preceded that of such other Canadian folksingers as
Leonard Cohen, Joni Mitchell and Neil Young. If you’ve attended folk music jams,
it’s likely you’ve joined in on FOUR STRONG WINDS and/or SOMEDAY SOON.
Tyson was around horses all his life, and was even active in rodeos in his teens
and twenties. While recuperating from a riding fall, Tyson (fatefully) began
playing the guitar, and later began singing with Sylvia Fricker. They married in
1962, shortly after they had begun performing full-time. Ian and Sylvia were a
classic folk duo during the 1960s, well-known in the U.S., and were also a national
treasure in Canada. They later starred and recorded with the group “The Great
Speckled Bird”, touring globally.
Four Strong Winds is one of the most sustainable of folk songs from the classic
‘60s folk era, and alludes to Tyson’s Canadian roots, while SOMEDAY SOON comes
out of his experiences with rodeo life. Tyson’s songs have been recorded by many
artists, including Waylon Jennings, Peter Paul & Mary, Judy Collins, the Kingston
Trio, Skeeter Davis, Glen Campbell , Tanya Tucker, Crystal Gayle, Lucy Kaplansky
and Neil Young.
Thank you, Ian Tyson, for sharing your music with us “folkies”. Your songs will
likely outlive all of us who are still around. You came up with some classics! 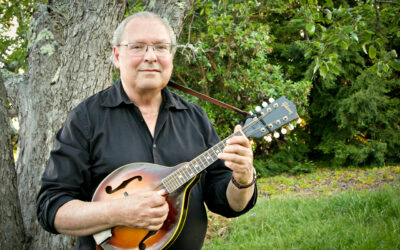 (photo by Roger Bolt) Click HERE for the link to the December 28th article in the Press Democrat about Gus! Note: He is listed on our website lessons page. He can be contacted by email: [email protected] 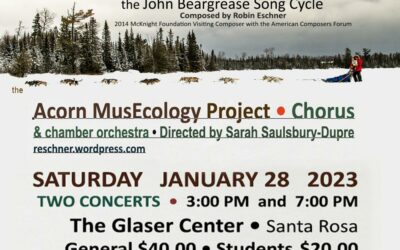 CRAZY COLD BEAUTIFUL is a song cycle about the history and culture of sled dog mushing in northern Minnesota. The composition is inspired by the contributions of 19th century Ojibwe mail carrier, John Beargrease, who worked with his sled dogs to deliver the mail...